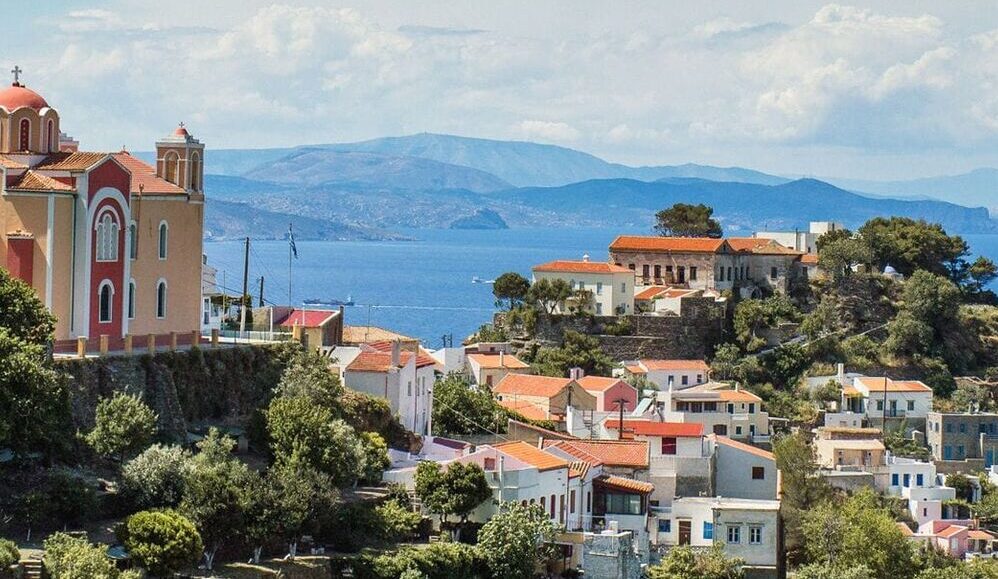 Just 1hr by ferry from the port of Lavrio, in eastern Attica, Kea is the closest Cyclades island to Athens, combining relaxation and freedom and offering visitors all the comfort they desire. It was known as Hydroussa in antiquity and christened Tzia by the Franks (a name by which it also goes today) and will reward you with clean beaches, wonderful footpaths and the handsome, stone-clad villas found all over the island. It’s also got a charming main town, Ioulis (or Ioulida). It’s a wonderful destination in its own right or the perfect addition to an Athens getaway. Don’t believe us? See for yourself. Here are some of the best things to do in Kea, to get your holidays started.

All holidays on Kea (Tzia) should start at Ioulis. Your first impression on arriving at the port, Korissia, is that Kea shares the barren landscape of other Cyclades islands but Ioulis (8km inland) is unlike any other main town (or Hora, as the main settlement of Greek islands is often called) of Greece’s most celebrated island chain. Its houses are colourful and often have ceramic tiles, while the paved alleyways give it a village feel. Grab yourself an ice cream and explore as many as you can. Look out for the neoclassical old school building and town hall (built in 1902) and the small archaeological museum. And don’t miss Kea’s famous stone lion, smiling enigmatically at visitors since around 600 BC.

2. A hike to ancient Karthea

The beauty of prehistoric Karthea is that you can only reach it by foot or boat, meaning that it’s an archaeological site whose atmosphere is even more impressive than its long history. It was inhabited for 1,400 years (abandoned in the 6th century AD) and was one of four ancient cities on Kea. There are numerous well-marked hiking trails on the island, but our favourite is from Ioulis (in the centre) via Mesaria, Profitis Ilias, Astra, Ellinika, Agios Simeon and finally to Karthea on the south coast. It’s a demanding 12.5km hiking but wonderfully rewarding and is best done with a guide (who can arrange return transport), like Kea Terra Active. Alternatively, there’s a 35-45min downward trail (longer on the way back) from the Havouna or Stavroudaki village to Karthea, where you’ll be greeted by temples dedicated to Apollo and Athena and an ancient theatre. The views are amazing and there’s a beach below the archaeological site for a well

3. An excursion to Vourkari village

Another highlight of Kea (Tzia) is Lilliputian Vourkari, a wonderful fishing village with great options for food and cocktails and a view of bobbing sailing boats and yachts. It’s one of the liveliest (despite its small size) spots in Kea, with a row of seafront cafes and restaurants (see the list of restaurants below) that provide the ideal setting for a seafood meal. And if you aren’t intending to go to Karthea, make a point of visiting the prehistoric settlement of Agia Eirini, just next door.

Holidays in Kea mean swimming in blue-green waters and at beaches with sand and fine white pebbles. There are beaches for every taste, cosmopolitan and remote. Gialiskari beach is in the cosmopolitan category and Koundouros and Spathi are justifiably popular choices. For something quieter and more private, Sikamia is heavenly, as is Kaliskia (with its natural shade and tamarisk trees). There are many dirt roads on Kea that lead to magical beaches (a good reason to hire a 4×4) otherwise you can always complete the last stretch to the beach by foot. And if it’s water sports you’re after, Koundouraki (next to its big brother, Koundourou beach) is home to Kea Water Sports, offering hours of sea fun with everything from SUP and pedalos to wakeboarding and speedboats with donuts and banana inflatables.

5. Go diving to a shipwreck or sunken WW2 plane

Kea has established itself as a fully-fledged diving destination in Greece. There are four known shipwrecks in its waters, including none other than the Britannic (sister ship of the Titanic), sunk by a World War 2 mine whilst operating as a floating hospital. And while the Britannic’s 117m depth makes it out of reach for recreational divers, other wrecks are accessible for divers of all abilities. Kea Divers are based at Vourkari and Koundouraki and offer everything from beginner courses to technical dives to an intact Junker 52 German World War I airplane and the 1897-built S/S Burdigala, more than 60m down. But fear not, there are also wrecks at 10m and plenty of other underwater features to explore, such as sea walls and intriguing rock formations that attract pelagic fish.

6. Visit the churches and monasteries of Kea

If you hiked from Ioulis to Karthea, you’ll have passed by Agios Simeon in the area of the island known as Kato Meria. It hides another of the island’s highlights, the church of Agios Simeon, built on the site of a temple dedicated to Aphrodite and with views over the Aegean Sea. And if you think that’s special, wait for the view of the Monastery of Panagia Kastriani (the patron saint of Kea), founded in 1700 AD in Kastri. Built on the edge of a cliff, its views are literally breathtaking.

7. The culinary delights of Kea

Last but absolutely by no means least, you’ll be blown away by the choice of food in Tzia, with locally produced meat and dairy products, and delicious dishes in restaurants (from home-cooked food to gourmet cuisine). Highlights include lobster spaghetti in Kourkouri and the upmarket choices in Ioulis … and of course the traditional tavernas all over the island. A local delicacy to look out for is loza, a pork-and-spice sausage, thyme honey and cheeses like xerotyri, ksino and kopanisto. Pop into Tyrakeion, specialising in cheese and dairy products, in Iioulis and you’ll understand.

8. Attend the Festival of Fairy Tales

Every July, Kea plays host to an event that celebrates the island’s storytelling tradition, with a summer festival in which local and international writers and artists narrate fairy tales and sing songs to audiences at various locations. The festival’s aim is to continue Kea’s ancient tradition of myths of nymphs and fairies.

The best things to do in Kea

Who knew that the charm of the Cyclades islands could start so close to Athens? Just an hour from the mainland, Kea instantly transports you to Greek island life with walks, beaches and amazing food. What are you waiting for? Which of the best things to do in Kea tempted you most?

Where to eat in Kea (Tzia)

Where to drink in Kea (Tzia)